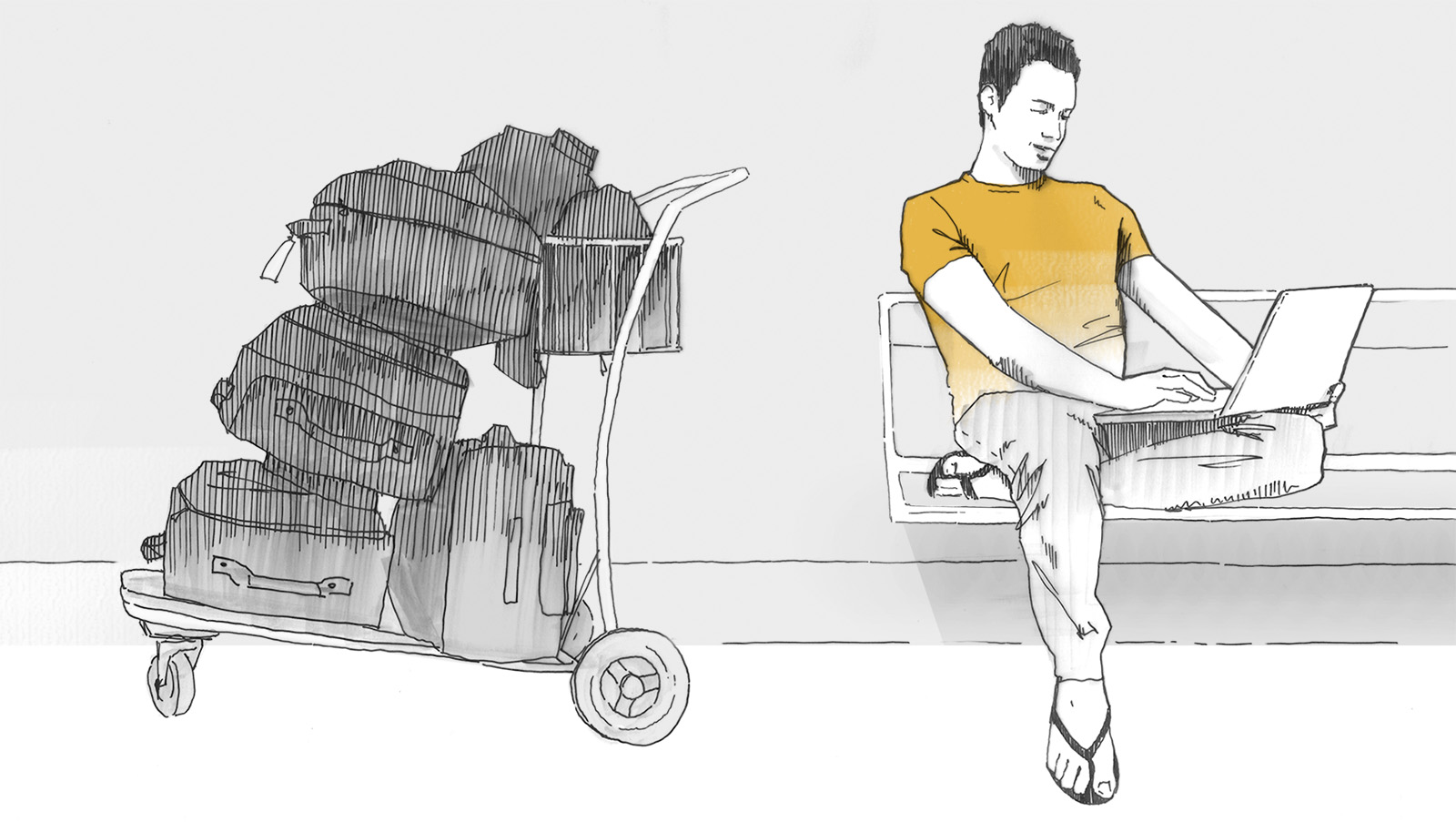 My friend Bert-Christoph plans sugar factories. Because there can’t ever be built very many of them in one spot he travels all over the world. Today Lisbon, tomorrow the Midwest, in between South Africa. He’s worried when there’s a week without any travel activity. I on the other hand need post-it notes on the hotel nightstand to help me remember which city I’m at.

If Microsoft Germany’s personnel manager Dr. Elke Frank had any say about it all of us would be like Bert-Christoph: unbound and independent of our desks. “The absence from the office is irrelevant,” she says in an interview with Focus magazine. She implies that home office is a trend moving at the pace of a speed train. „You have to get on board, otherwise you won’t attract any qualified staff anymore!” Businesses want to catch this train because its destinations are called area efficiency and area reduction.

Shamed be he who assumes a connection between the two: Microsoft propagates the very cultural change which incidentally promotes the sale of their core products. True, mobile work has certain technical requirements – without cloud solutions that guarantee a secure access to the company server, a home office could not work. Is Dr. Frank talking about a Trojan speed train to substantiate her software’s right to exist?

When Google’s Marissa Mayer – Yahoo executive at the time – abolished the home office in 2013, Spiegel magazine called her a slave driver. “The workers who used to move about freely in Yahoo’s rock crushers must return to the yard for drilling. Tautly chained together, from now on they will sweat away in lock-step – their minds on nothing but escape.” Only slightly less harshly the paper Süddeutsche titled: “Whipped back to the desk”.

Back and forth – is this large-scale home office debate even real? According to BSO magazine 2013/14, 97% of German employees still have a personally assigned work space. Only one fifth of them can imagine giving it up in the future. It’s about time this most important debate about work place design for Europe’s future generations was brought back down to earth.

You are what you eat

In my halfhearted quest for a diet which will restrict me as little as possible I stumbled across Dr. Pape. His method of insulin food combining is based on the theory that genetically we are either “nomads” or “farmers”. We digest carbohydrates and proteins in two fundamentally different ways.

The nomad handles protein better. In prehistoric times it were animals, today he hunts projects –salesmen, marketing specialists, and consultants run on the genetic programs of former hunters; they do business from their cars and have no problem finishing reports in the airport restaurant among a bunch of strangers.

Farmers on the other hand used to grow crops and therefore adapted to starchy carbohydrates. Today, bookkeepers, planners, constructors are the ones who follow in the early settlers’ footsteps. Some of them still erect boundary walls out of paper and file stacks or barricades of indispensably high cabinets.

Here we go again: the swarm

You don’t have to send your entire staff for blood testing to find out whether they’re farmers like Mayer or nomads like Frank (who by the way has recently folded up her tents at Microsoft and has moved on to Telekom). You just need to listen. Medical science speaks of etiology (Greek: the study of origination) when a doctor investigates causes.

“Activity Based Design” is what we Arbeitsweltverbesserer call this approach. This means: Take a look at the users, talk to them, and only then start designing a new building. The good thing about that? To figure out who of your staff doesn’t mind switching workplaces all the time or working from home, and who better remains unchallenged for their territory if you want to build on their competence and creativity in the future, you just need to ask them.

What’s even better: You can save money for external consultants. „If Siemens knew what Siemens knows.” This points to the location of the pot of gold at the end of the rainbow: swarm intelligence. The knowledge within your company is all you need to sustainably improve the circumstances.

If you still want to introduce the new desk-sharing philosophy a probably overpaid workplace specialist suggested in order to save you a completely overblown amount of money on rent and other office expenses, be advised that this will be a miscalculation.

To say it with the words of Dr. Martin Kleibrink[*]: „If you suppress the motivation of your workers by stripping their work environment you will lose at one stroke more than even the most area efficient office can ever recoup.”

Why? Today about one third of the working population are nomads. A large portion of them already has jobs away from a desk. Their percentage in any office – depending on the industry – should be somewhere between 5 and 25%. The remaining 75-95% of farmers whose desks you want to take away probably feel like any other farmer who loses his farm:

Angered and saddened he lets his fields dry up.